Dateline - May 31st - Took car for an extended drive, well as far as McClendons in Woodinville to get some string trimmer line (doing yard work today). The car did well, but it jumped out of drive on me a couple of time. The previous owner told me it did this and I realized that the shift quadrant for the car was for a three speed! The TH700R4 tranny in there now is a four speed! So it looks like I am going to need to source a four speed quadrant, or better yet, get an aftermaket shifter, like a Hurst ratchet shifter! That would be cool!
Posted by Ed at 10:12 PM

Dateline - May 30 - Bought new battery ($88) and found out that I will not be able to use standard batteries in this car because of the terminal position and the height of the battery area. Oh well! This car is 38 years old!

I decided to pull the steering column to see what was causing the dragging. This was a real chore since it required pulling the entire dash out! It was amazing just how much this car is like my old Spitfire. They even used the same blind bolts to hold the wooden dash!

After getting the column out, I took it to the bench and started taking it apart. As soon as I got it apart enough to loosen up the ends a bunch of little pin bearing fell out! I knew this wasn't good. The bottom end bearing was trashed! Were was I going to source one of these! I did some deep thinking, but had no idea were to get one of these. I went to the local parts store, even to a bike shop, but no go. I'm going to try a local bearing supplier that someone turned me onto, but until I get that, I greased the column really well and put it back in.

The good news is that I really know the inside of the dash now! And the steering is much smoother then it was before. I also took some time to straighten out the wiring under the dash, which was surprising pristine! I also cleaned up the Hazard flasher, which had corroded really bad, but now works like a charm.
Posted by Ed at 10:03 PM 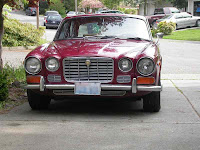 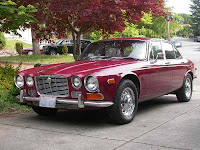 Dateline - May 25 (Memorial Day!) - I decided that I wanted to bleed the brakes before I drove the car the first time. Seemed like a good idea since I did not know when the last time they had been done. So I started the task by sucking the oil out of the reservoir and cleaning all the junk that had built up there.

I then jacked up the right rear of the car, taking the wheel off and climbed under the car. The first think I noticed was that the new, non-stock exhaust was sitting right next to the brakes, which are inboard on these cars. It was a real pain working around everything under the car to get the brakes bled, but I succeeded. I also took the time to clean, polish the chrome and armor-all the wheels/tires.

The left side rear was even worse the the right. The exhaust was rubbing against the bleed valve waring it flat on one side! I managed to get this one bled, but it was a chore and took almost an hour to get it done.

Fortunately, both the front brakes were pretty easy, so they didn't take long. Now I had fully bled breaks and clean wheels!

I decided it was time for the car to move. I put the trailer battery back in and started the car. After a few tentative moves down the driveway, I turned her into the street and started down the road. I noticed two things, the steering seemed to have a real rough feeling (I had the same thing in the Spitfire and suspected it was some dry bushings) and the transmission would not shift out of 1st until I hit about 2500 RPM, even with little acceleration. This would require some research, since I knew nothing about the TH700R4 transmissions. But I did drive the car a bit and put it back into the driveway (Notice the picture of the car facing the other way!)

Now I just needed to get a new battery and I'd have a real driver. Hour count: 5
Posted by Ed at 9:47 PM

I Had a Bright Idea

Dateline - May 24 - I thought about the alternator problem all night and most of the day and could not figure out the problem. I dug through the schematics and manuals that I got with the car, and the only thing I could think of was the Lucas regulator, which was still wired into the car. I started pulling wires and plugs, but nothing would stop the squeal. I was about to give up, when I though, "Maybe it is the battery". After all, if the alternator was bad, maybe it took out the battery. I started the car and pulled the negative terminal from the battery and guess what! It ran like a top! No squeals, no noise, and the car seemed like it had a large load taken from it. I took the battery out and went to Schucks. They tested it and said it was good. I was not going to buy another battery just to find out that is not the problem, so I went home kind of dejected.

I decided to try to figure out why the water drain hole on the left tank was not working, so I pulled the rear bumper and the left bottom fender valance, which exposes the bottom of the tank and discovered that the rubber hose that is supposed to exit out a hole in under the car was pushed into the fender. I ran a wire up the whole and cleared out a whole bunch of crud, then after checking that water pored right out, I fitted the fender back, but left the bumper off so that I can polish it.

I then had an idea. Why don't I pull one of the batteries from my trailer and try it. I know you should not use deep cycle batteries on cars, but this was just a test. I pulled the battery and it worked! So, I needed to get a new battery. I felt pretty good and decided to give the car a wash. I put about five hours of work in. Not a bad day!
Posted by Ed at 9:35 PM

Getting her running - Alternator was bad

Dateline - May 23 - Of course, I had to dig right in as soon as the car got there. Since the car had sat for awhile, I decided to pull the plugs and spray WD-40 into the cyclinders, just to free up any rust that may have accumulated.

The prior owner had problems with water in the left gas tank because of a plugged drain in the filler cap (typical British over engineering). I pulled the plug on the bottom of the tank and drained out the gas. Unfortunately, the tank was just about full (12 gallons), with about 2 gallons of water in the bottom. Filled up a few jerry cans but got all the gas out.

The car also had a short that needed taking care of. Started troubleshooting by removing all wiring connections, pulling fuses, etc., and discovered that there was one bad interior circuit (map lights, interior lights, Fuse #2) and that the alternator was bad. $47 later, I had a new alternator on the car.

I drained the oil and put in a new filter, put the plugs back in, put fresh gas in the tank and pored a little down the card. The moment of truth was at hand. I turned the key. The motor cranked about six times and fired right up. But at high RPM, I started getting a really bad squeal. I thought it was the power steering pump, which was light on oil. I filled it back up and started the car, but still had the squeal. It was the new Alternator! The shaft of the alternator was burning hot! I took the alternator off and took it back to the store. They tested it, but said it was good. They gave me another one anyway. I installed it and sure enough, same thing. The only thing I could think was that there as a straight short to ground pulling down the alternator.

By this time I had spend about 7 hours on the car and was done for the night, well almost. I pulled the hubcaps and polished them that night while I watched a movie! It's an illness, I know!
Posted by Ed at 9:21 PM 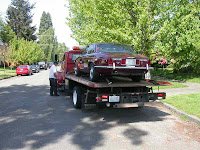 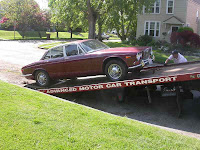 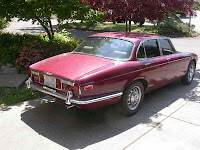 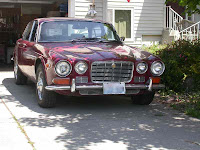 Dateline - May 23 - The Cat Arrives! Since the car was not running, I had it towed by flatbed from Tacoma. The towing process was easy, although a bit costly and the car ended up backward in my driveway. My goal for the weekend was to be able to turn it around under it's own power!
Posted by Ed at 8:03 AM

The Offer I Could Not Refuse 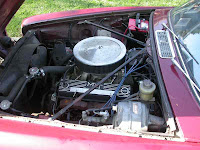 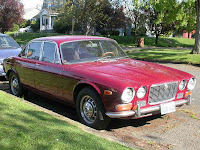 refuse. He told me 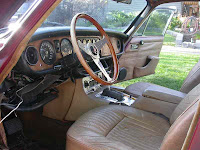 that he was getting rid of his 71 Jaguar XJ6. This is not just any XJ6. It has a Chevy 350 V8 installed! The car ran last summer but has sat for the winter and appears to have a serious short under the hood.

I helped Matt get this car going last summer and knew just how cool this project would be. Top that with the fact that this is the car I've always wanted to build since I restored my 76 Spitfire in 1987, what could I say. "NO"? I think not!
Posted by Ed at 8:13 AM