Dateline – Oct 24th – 27th – I removed the back window to see what I really had as far as rust on the back deck. The window came out easily enough since it is held in with a seal, not glued in like modern windows.

After getting the widow out, I started scrubbing at the rust. The left side of the back deck was not too bad, with just a few small holes that can be easily repaired with some creative welding. The right side, well that’s a whole different story! At first I thought there was a lot of rust just on the deck and the more I scrubbed, the more or should I say, less metal I found. Eventually, I found that almost the entire back deck in the right corner was rusted through!

But that’s just the beginning. I then attacked what I thought was a bad repair job of replacing the left fender. There was a noticeable bump on the back panel between the trunk lid and the window frame about four inches inboard of the right fuel filler. I took a chisel and started working on this area. Soon, layer after layer of body filler started coming off until I found myself looking at a piece of metal that I thought was welded to the body, but found out was glued! After prying up the metal, I found a four inch hole going from the trunk seal lip up to half way up the fender! This whole was filled in with some sort of black foam, glue and body filler! 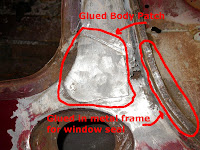 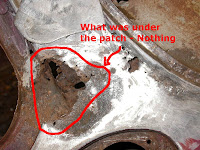 OK, so now I’m thinking this guy didn’t know how to weld and was just trying to get the fender replacement to look right. Unfortunately, the foam and body filler did a good job of holding water against the body, rotting it even more.

Reviewing the crease weld that is used to hold the window in, it looked like there was another piece of metal welded there and reinforced with some pieces glued to the back deck. I thought these were to help support the fender which had been replaced but that the window crease was pretty much complete. 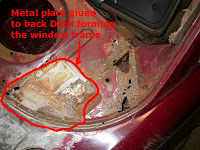 Well, Monday night I got ambitious and decided to find out what was under the metal plates glued to the back deck. I should have gone to bed because I couldn’t have a nightmare as bad as what I found. The glued in panels hid about a pound of body filler that was used to build up the entire window frame! The metal around the crease weld was glued in and held in place with body filler. The entire section of the car was filled with filler! Once the material was removed and I could see what was left I realized that this whole section of the car was totally rotted away! 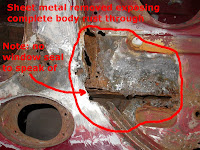 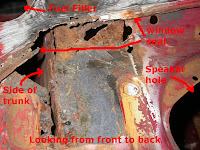 So, what I thought was a poor fender repair now appears to be a very crafty, and successful attempt at hiding a huge defect in the body by one of the previous owners! How this part of the body got so rusted is beyond me. It makes me wonder if something was left laying on the car that held water against the body to rust it through like this.

So, now what? On the good side, the metal being gone will make it much easier to get into the parts of the car where more rust may be. The bad side is that the metal being gone allowed water to run into areas that could compromise the car structurally, particularly around the C pillar and where the wheel well attaches to the rocker panel. If this area is rusted, the body is done with because the only way to fix this is put the body into a jig, cut and re-weld. Way beyond my skills, space, desires and budget!

What I have at this point is repairable in several different ways. I can find a donor car, but I suspect that they will be as rusted as this one is, I can manufacture rough body panels as replacements and weld/Bondo/lead them as a repair or I can build an armature and fiberglass them in. One of my friends suggested carbon fiber which would make a very interesting looking race stripe! You do have to laugh or you will cry!
Posted by Ed at 6:31 AM 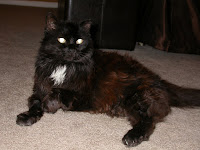 Sheena – 1992 – 2009
It is with regret that I announce that our cat Sheena passed away today at 5:30 am. She was a very loving cat, who was the mistress of the house as well as the master of the dogs and us. I will always remember the way she would fall asleep purring on my chest when I laid on the couch, or walked up to me and plopped down on the floor, resting one of her hind paws against my foot, letting you know she was there, or watching her on the porch enjoying a sunny spot (and keeping the dogs from laying there while she was at it!) She had been very sick over the last month with kidney disease and the extreme pain she was in yesterday and this morning made our decision, although not an easy one, the loving and humane one. She made a warm and fuzzy bed in our hearts and that warmth will be sorely missed!
Posted by Ed at 4:56 PM

Down for the Winter

Dateline – Oct 10 – Well, I finally did it. I’ve put the car down for the winter! It is now on jack stands in the garage and in a definite “not running” state. 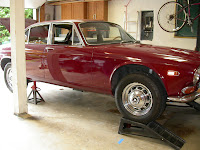 After getting the car off the ground, I started tearing it apart, starting at the boot lid and working forward. I removed the boot lid and took a good look at that. Looks like some surface rust where the vinyl panels were glued to the metal (good way to capture moisture to cause rust!), but most of it looks easily repairable. I then took off the bumper and started removing the gas tanks. I’ve never taken the tanks out of a Jag before, so there were a few things that were difficult, but mostly, it was getting my hands and wrenches in places they did not have room to go. Once I got the tanks out, I found various states of rust (surprise!) 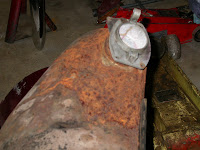 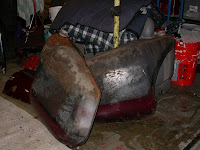 One tank must have had ½ inch of flaky rust on top of it where water had been sitting and just rotting away the tank and body! Fortunately, it does not look like the rust is all the way through either tank. The prior owner said that he thought the right hand tank leaked, and I found that the breather hose was off and he confirmed that he thought that was were it was leaking too. I think my next job is the get the tanks on the bench and get them cleaned up and sealed with POR 15 or some equivalent gas tank repair paint.

However, on a more discouraging note, I also got a good chance to see the real condition of the body, and I’m worried. I definitely have holes in both back fenders which are going to need repair (I may be able to weld these closed), but my bigger concern was the absolutely terrible job one of the prior owners did replacing the back right wing! HORRIBLE! 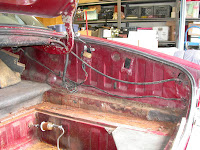 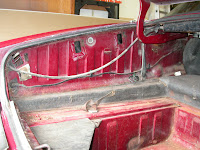 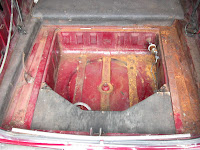 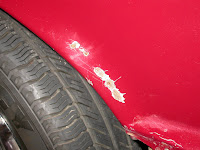 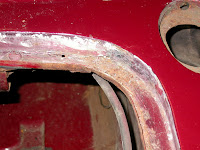 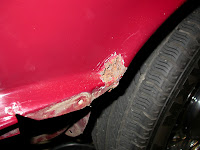 The repair left areas for water to seep into the seams and rot the car out. Part of the fender is held on with Bondo, and there were holes in the boot lid water channel that let water run right into the boot, explaining all the rust in there! I haven’t pull the window out yet, but I suspect all the rot around the window is caused by the botched repair!

The good thing thus far is that the structural parts of the car still seem sound and I can repair most of the sheet metal problems. My decision point is this: I have rust that has worked its way from the back to the surface of the fenders, which means even if I patch/weld the holes, there is still rust behind that will eventually come through. I am going to buy some rust-repair paint that can stop the rust, but I have to get the paint to the rust, which I may not be able to do. But will I feel comfortable doing the best I can, painting the car and running the risk of it rusting through again in a couple of years?

I have four options, from least to most expensive:
1) Put everything back together and sale/donate/give away the car,
2) Do as much as I can and be happy with it,
3) remove the rotting metal and replace with new/used pieces, or
4) Pull all the good stuff off, throw away the body and buy a kit car kit!

Right now, option #4 looks the most promising! But I really like owning a Jag and I wouldn’t have that if I did option #4!
Posted by Ed at 8:16 PM