Not Feeling Well, But Work Goes On!

Dateline - 26 January, 2013 - I've been fighting a cold all week and didn't want to work out in the cold garage, so I did some work on the electronics I could do in the house.  Last week I ordered a 14 Amp, 12 volt DC power supply to test out my wiring.  Several weeks ago I bought a breadboard, jumpers, LEDs, ribbon cable and micro switches for the for the dashboard indicator console.  So I decided to wire up the LEDs and switches on the breadboard to see if they would work.  Here is what I come up with: 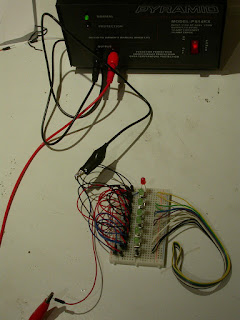 Since I got that working, I then drew up the wiring schematics.  I have a 12"x12" PCB board that I am going to use etch the wiring diagram onto.  I found a great source for instruction on doing this here (http://electrons.psychogenic.com/modules/arms/art/10/PrintedCircuitBoardPCBHOWTOAnIllustratedGuide.php).  I wasn't able to finish to drawings because I need the male 10 pin plugs that will be soldered to the board, but they are pretty close.  Here are the two drawings.

Finally, I hooked up the power supply to my rack of eight switches to see what the LED's look like when they are lit.  I have a choice of either having the lights on all the time, on when the switch is on or on when the switch is off.  They are very bright, so I may want to put some resistance, or wire two or three in series to reduce the brightness.  Here is what they look light fully lit: 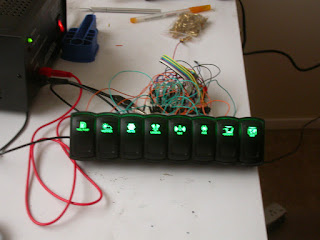 So, once I get the male 10 pin plugs in, I can finish up the wiring diagrams and start the etching process.  I also thought about using my 3D printer to print the diagram on the board if the laser printer option describe above doesn't work.
Posted by Ed at 7:23 PM

Dateline - January 19, 2013 - Worked on more electrical wiring this weekend.  The goal, install the automatic headlight system.  I purchased an aftermarket Automatic Headlight with daytime running light system last year.  The kit includes a main CPU, a photosensitive diode, an override switch, a set of relays for Headlights and Sidemarkers, and wiring to connect it all together.  The Unit has a lot of features including:

- Daytime running lights (headlights only during the day)

Since I'm not installing a security system, and didn't want the headlights to come on with the wipers, I removed those wires from the wiring harness.

Next, I determined where I wanted to mount the unit.  I'm trying to put all my electrical items in the cavity in the center console, so I found a good place to mount the unit, on the bracket used originally for the Air Flow control levers (left and right).

My next decision was were to put the relays.  Well, this car is going to have a lot of relays!  I already have a relays for the ignition cutoff switch, and one for the transmission torque lock, and now I have two more for the automatic headlights.  As I thought about the new wiring, looked at schematic, and the original wiring, I realized that the original had all the headlight power coming from the battery, into the headlight/sidemarker switches then to the fuse box and to the lights.  This means that the two switches have to carry all the current used by the headlights and sidemakers!  That's a lot of amps!  Even thought the new Aircraft switches could probably take this sort of power, I didn't want to push that kind of current through the switch.  This means two more relays.  I will also want some relays for interior lights and auxillary power.  That makes a total of eight relays.

So, I decided to create a relay frame that I could mount on the transmission tunnel access panel.  This required some more sheet metal fabrication including cutting, bending, filing, welding captive bolts onto the frame and the access panel, and painting.  But now I have a great place to put all eight relays, and can even put two to four more there if I want. 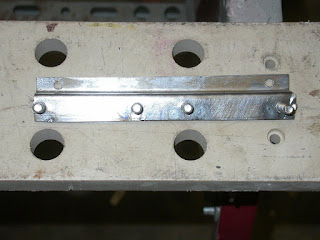 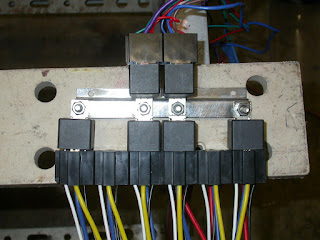 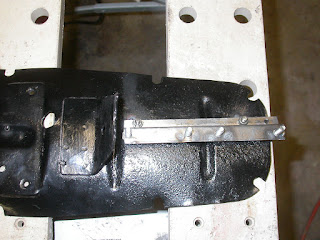 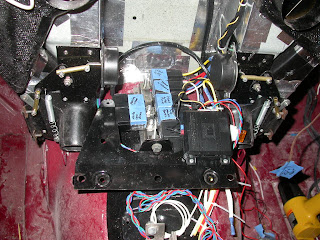 The last trick of the day was doing the wiring, which required some spelunking around the old wiring harness.  I had to find where the hot came into the light switches and then were the headlights and sidemarkers came out.  Turns out the Hot and Headlights are in one plug, while the sidemarkers are in another, both on the left hand side of the car.  Since I don't want to cut the plugs from the original center instrument cluster (would really impact resale value), I'm creating my own wrirng by building pins that will plug into the existing harness plugs.  Once I have all the wires set, then I will build a plug around them using Silicon or RTV.

I still have a little wiring to do.  I have to wire the automatic headlight cutoff switch and the actual headlight and sidemarker switches.

I'm pretty happy with how this worked out.  Next I'm either going to tackle the heater fan wiring or the cruse control system.
Posted by Ed at 9:29 AM

Starting Work - One Item at a Time

Dateline - Jan 12-13 2013 - Have started working on the car again.  I've got a lot to do and I noticed that by spring of last year, I was getting very distracted by trying to do too many things at once.  So for a while I want to work on only one thing and get it as done as possible.  So, this weekend I decided to work on the heater control.  Several weeks ago I found a wiring diagram online for the Chevy Astro Van, which is where my heater control and vent door actuator comes from, and spent an evening figuring out the pin configurations.  I even jury rigged some wiring and tested that everything worked.  I also ordered a Mr. Gasket choke cable, that I am using to drive the heater core water flow valve (from a 70's Ford Bronco) via the actuator motor.  The valve needs to be in the engine compartment, while the actuator motor needed to be inside the car.  Looking around I found a good spot on the right hand fender well to put the value and a place under the glove box, behind the new fuse holders for the actuator motor.  Now I needed to manufacture the components.  I'd need a bracket to mount the valve on the firewall, a bracket to mount the actuator, a bracket that mounts to the actuator and holds the cable in place and an arm for the actuator.  All of these were cut, filed and drilled out of sheet metal, fitted and painted black.  I used stainless steel hardware and nyloc nuts to make sure everything stays were it's supposed to be.  I may need to build a small heat shield inside the engine bay depending upon the heat buildup, but I can deal with that as necessary.  Here are pictures of the components and installation, including pictures of the valve in closed and open position, driven by the actuator motor. 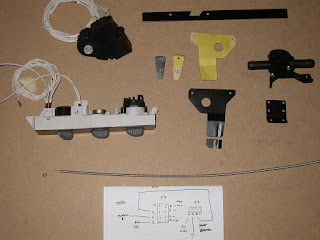 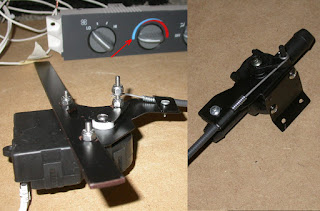 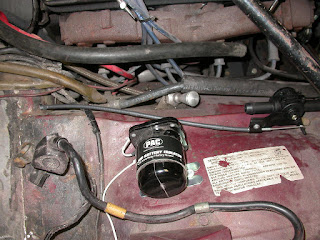