Dateline - 05/14/2017 - Didn't work on the car on Saturday because I did a 20+ mile bike ride on Vashon Island (https://en.wikipedia.org/wiki/Vashon,_Washington), but did do some work on Sunday.  Wanted to focus on getting the issues we found driving the car, which was, no speedo, backup lights on when in park and flickering light on oil pressure gauge.

I decided to tackle the backup lights first.  This required that I take the shift lever boot cover and B&M plastic surround out so that I could get to the switches that are mounted on the shift lever.  It's fiddly work and requires taking the top part of the shift lever apart.  It's just two bolts and a clip and a spring, but it's still a bit of a PITA.  Once I had access to the switch I needed to do some troubleshooting.  There are two micro switches ganged together, one controls the backup lights (top one) and the other controls the ignition cutout (bottom).  The switches ride against the side of the shift mechanism which has lobes to close the switches depending on what gear you are in.  Easy system in principle, but it is very critical that the switches be the right distance from the shift body.  Well, they weren't.  Way to close.  In fact, both switches were engaged almost all the time.  I needed to get in with a big screw driver and lever the switches away from the body.  Once I got them the correct distance, all was well.  but this took several attempts to get it correct.

The second problem was that I had hooked the hot wire that goes to the LED lights on the dash and the one in the B&M console to the switched side of the backup lights.  Since the switch was on all the time, I never noticed the problem.  It was only after I got the switches working correctly that I noticed that the lights didn't work correctly.  That was an easy fix; just move the lead from one side of the switch to the other.  Done and done!

Next was the speedo.  I wasn't looking forward to this because I was pretty sure I had to take the dash apart!  Grrrrr.  Getting the dash out isn't that hard.  I needed to take the dash cover off, which just pulls out, take three screws out, and the dash comes right apart.  But once I put it together, I really didn't want to take it apart again!

Once I got to the back of speedo, I was able to troubleshoot.  I jacked up the rear of the car so that I could put it into gear and also get under it to get to the sender, which is right next to the exhaust.  I started tracing wires and realized that I forgot to hook the hot wire to the sender.  The wire was run correctly, I just didn't connect it at the speedo.  Two hours of troubleshooting (mainly because I had to wait for the exhaust to cool down), five minute fix!  Speedo now works.  Took about 10 minutes to put the dash back together,

Before I put the dash pad back on, I looked at the oil pressure gauge light.  Of course, once I had everything apart, it worked fine and I could not get it to flicker!  So there is a loose wire someplace, but I've no idea where.  It will reoccur at some point.

So, now that the speedo is working, I need to calibrate it.  They have a really cool way to do this.  You press and hold the trip reset button then start the car.  The needle will move all the way to the right and hold at full.  You drive the car to the start of a measured two mile run.  Stop the car and press the button again.  The needle moves to half deflection.  You drive the two miles and stop, then press the button one more time.  Voila, it's calibrated.  It doesn't make any difference how fast you go or if you stop as long as you don't turn the power off.  It is measuring the number of pulses delivered by the sender unit over a two mile length.  The thing that will really impact the calibration is how accurate your measured two mile distance is.  Pretty cool! Fortunately, I have a couple of those "Your Speed Is" signs around that I can test the accuracy!

One thing I noticed while under the car is the power steering rack is REALLY leaking oil.  I mean, a lot of oil.  Looks like I need to replace that before I get to doing any serious driving!

So, as was promised in the last post, I have some video of the car.  Check these out on YouTube:

Thanks Matt for the video.
Posted by Ed at 7:09 AM

Dateline - 05/06/2017 - After almost seven years of being garage bound, the Jag finally drove under it's own power this weekend!!!!!!!  Matt and Karen came over to help me bleed the brakes on the car, which was a three hour job!  What a PITA!  But once we got it done, we took it out and drove it around the neighborhood!  Boy what a difference in driving experience.  Let's just say, it's not my Subaru WRX!  I have to remember that I'm driving a 1960's car!  I've got a video I'm going to post a little later, but here are just a few of the pictures that Matt took: 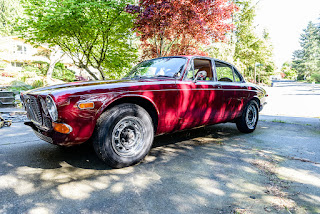 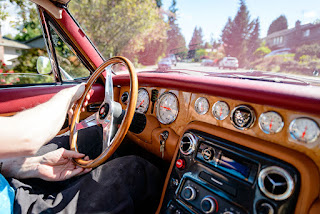 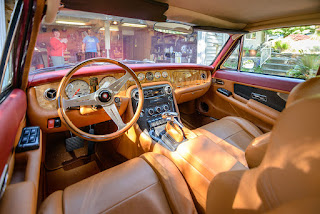 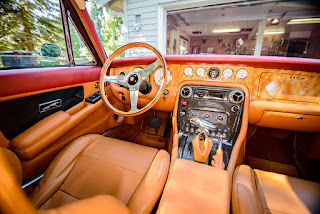 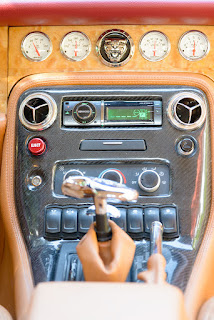 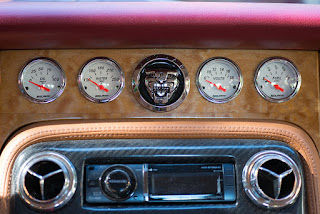 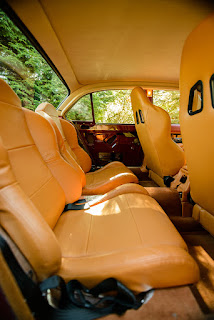 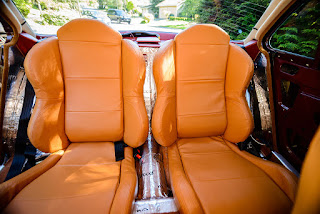 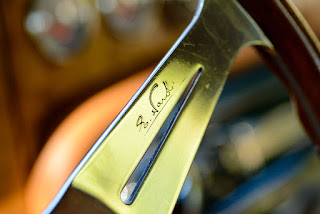 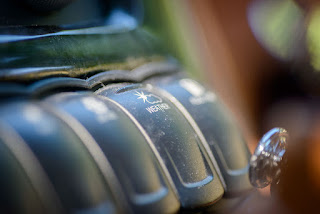 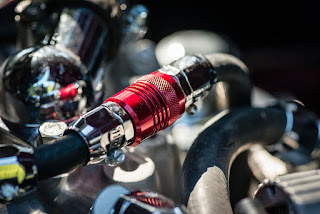 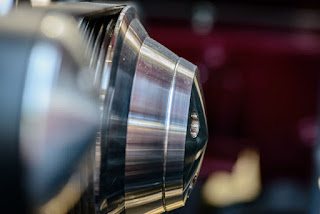 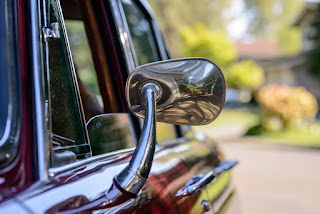 So there are a few kinks to work out.  My speedo isn't working.  The backup lights are on when I'm in park, and I have one bulb in the oil pressure gauge that has a faulty connection (flickers on and off).  Everything else is working fine!

On Sunday, I put in the new seat belts that I ordered last week.  Of course, it wasn't easy because the front passenger seat hit the auto retracter, which is just behind the seat on the rocker panel.  The driver side was fine.  So I had to fiddle with the height of the seat, eventually requiring me to pull the seat out completely and drill some new holes in the seat mounting bracket.

I also got the back seat belts installed, which required removing the seat cushions and drilling holes in the back firewall to mount the belts.  Nice that I used Velcro to hold the cushions on.  Rrrrriiiiiip!  They are out!  Fiddly work, but once it was done, it worked fine.
Posted by Ed at 8:10 AM

Back Seats are Done!!!

Dateline - Week of April 24, 2017 -  Spent every night last week sewing upholstery for the back seats.  Honestly, I'm gland I'm done for a while.  That was a lot of work!  Here are the seat pieces fully done. 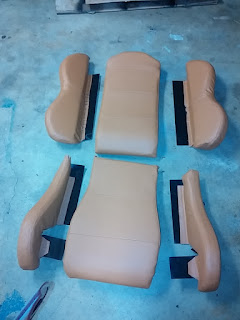 Next was installation.  Easy to say, not so easy to do!  The plan was to mount the bottom bolsters, mount the back bolsters, glue Velcro strips on the the bolster frames then put in the cushions.  Easy! NOT! The outside bottom bolsters were pretty easy.  Position, mark, drill bolt down.  The inside bolsters, different story.  They are directly over the mufflers!  I had about 1.5" to get my hands into.  Not fun.  Plus, I had to reach the top of the bolts too.  So I took a long screwdriver and zip stripped the wrench to it so I could reach!

The back bolsters were easier to install, but I still had the reach issue because I had to reach in the car and into the trunk.  So, lots of extensions on the socket wrench and the extension on the wrench got the job done.


Last was epoxying the Velcro and letting it dry.  Since I had already sewn the opposite side of the the Velcro the to cushions, all I had to do was mark were the Velcro needed to be and glue it down.  Here is the result:

And finally, installation of the cushions:

I still have to figure out what I'm going to do with the area between the seats and the open area along the wheel well hump.  But I think that will wait. I'm doing with upholstery, at least for a week.

On Sunday I worked on some odds and ends.  There are panels that needed to be installed in the front wheel wells that I thought I would install.  Unfortunately, I needed to do some more prep work in the wheel wells first, so they didn't get installed.  But the hardware did get sand blasted and tin plated (I really like my tin plating setup!).

While I had the front tires off, I took some time to clean up the front headlight/side marker wiring.

Finally, I did some work on the fender cross members.  There are bars that run from the middle of the firewall to each fender to keep the fenders and front scuttle from shaking.  These are right in plan view but are some of the worst welding done on the car.  Sharp edges, nasty welds...yuk!  So I got out the angle grinder and my metal files and went to work cleaning them up.  I also put both through the sandblaster.  I still don't like the welds, so I think I'm going to treat them to some bondo.  No since doing all the nice work in engine bay to slap on a couple of nasty looking pieces of metal!

So, next weekend is the scheduled first drive!  Very exciting!
Posted by Ed at 7:31 AM