Like What I Said Last Week - "Why Can't The Wiring Be Done Already!"

Dateline - 04/28/2013 - Took Saturday off because I wasn't feeling well, so worked on the car 1/2 day on Sunday.  Again, more wiring, but I'm really making headway!  I have all eight switches that go into the center console wired and tied off!  YES!  Now I have two switches that go on the left lower facia (Master Power and Headlight Override) to wire, but I need to order the connectors.  I also have the digital dimmer switch to finish up.  I printed the box for it on my 3D printer on Saturday, so now I just need to wire it up.  I have to change the instrument light wiring that I created last year because I need to run the ground back to the switch, not to the chassis as I had originally ran it.  That gave me a chance to clean up some of that wiring too.

So what is left?  Wiring the fuse box in the trunk, dimmer switch, and cleaning up the remaining wiring harnesses.  Wow!  I'm really getting there!  Yahoo!
Posted by Ed at 1:29 PM

Why Can't The Wiring Be Done Already!

Dateline - 04/20/2013 - Another full day of working on wiring.  Boy-o-boy is this getting old!  The good news is that I've rerouted all the wires the way I want them, and laced them all together.  I left off with making up the wires for the switches.  I know how long they need to be and have them all ready to go, but ran out of steam at 5:00 pm.  So now, all I need to do is make up the switch connectors.  I do need to do some rewire for the instrument lights because I bought a digital dimmer control, but that shouldn't take too long.  I still have to sort out the wires running to the trunk on the drivers side of the car.  I also need to mount my new fuse block in the trunk.  But it's coming down to brass tacks now.

After I got done working on wiring, I went into the house and did some more work on the rear air recirculation box.  Several posts ago I reported that I scrubbed away a great deal of the rust and fiber glassed the holes.  This weekend I put a nice clear coat of resin to fill in any gaps.  I also took about the three remaining flapper doors and cleaned then up and rust sealed them.  I need to make one flapper door out of some sheet steel, then find a good replacement fabric for the hinges.  Yes, the original used a rubber impregnated silk as a hinge!  I think I'm going to get a good ripstop nylon or Kevlar.

Dateline - 04/14/2013 - I didn't do much work on the car this weekend. I had to take care of the other Jaguar.  It needed a 90K mile service, plus an emissions test and new tabs.  Took care of all that (and got a haircut, no, a real haircut, to boot!).  That was most of my Saturday.  I did try do some work with my 3D printer that was car related though.  I'm trying a new type of plastic called ABS instead of PLA in my printer.  PLA is easy to print with because it heats at a lower temperature (185 degrees) and doesn't warp a lot. ABS needs about 230 degrees and a very warm bed to print on (around 110 degrees) otherwise, it will warp, which makes it much harder to work with.  The advantage of ABS is that it is not biodegradable like PLA.  So, I want to make sure that any parts I build that will be on the car are in ABS not PLA.

The problem I've found is that my hotbed will only go up to about 80 degrees, not hot enough to keep the ABS stuck to it, so when it warps, it actually detaches from the bed and ruins the print.  I need to do some research to see if I can get the hotbed hotter.  I've seen a couple of blog postings about that, so we shall see.

Another car related 3D item is the center indicator bezel was printed in PLA and I want to print it in ABS.  The problem is that I lost the model I used to create the original because of a hard drive failure.  So I spent about two hours on Sunday recreating the model.  Tedious!  And I really hate doing things a second time.  But that's what you get for not doing enough backups!

So, not a very productive car weekend.  But I'm going to try to spend some time after work this week to get some stuff done.  Looks like it will be warming up a bit this week, so that will make it easier to go out in the garage!

Dateline - 04/06/2013 - Spent Saturday putting together my starter circuit.  I did some work on this several weeks ago but was not happy with the results.  I had soldered two diodes in line with the actual wire and I was thinking that is just an open circuit waiting to happen!  So I etched a little circuit and mounted it in a box from radio shack: 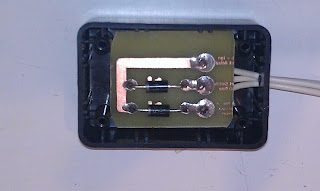 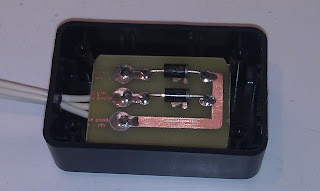 After I put that together, I mounted it under the dash and re-wired the four relays.  It took longer then I expected it would take, but I got everything working and tested.  It's going to be cool to have the power and start buttons on the center console!

The rest of the day was spend doing wire clean-up.  One thing is for sure, if I ever do this again, I'm going to spend more time running wire in a clean fashion while doing the work instead of tying to do it after.  Going back and doing cleanup really sucks!  I've probably wasted about 100 slices just cutting and re-cutting!  "If you can't find time to do it right, when are you going to find time to do it over!"

By about 6 pm I was done.  I was feeling a bit under the weather, so I called it a day.

Dateline - March 30-31, 2013 - Worked more on wiring this weekend.  First, I wanted to check out the wires that run to the trunk for the old fuel pumps, which I'm going to use for the fuel shutoff valves.  I found the wires intact, but I did find a short in the right hand wire where it had rubbed against the rear finder well.  I'm surprised this never blew a fuse when the fuel supply switch was set to that tank.  That tank was out of commission (leaking) for a long time, so it just may never have happened, but I'm glad I found it!

Next, I wanted to install the oil pressure switch that I ordered so that I can turn on/off the starter switch light.  Turns out there was already one installed on the car!  Should have checked that, but it makes total sense because there is a low oil pressure light on the original!  So, that was easy!

I then decided to formalize the relay area in the dash more by taking out the relay frame I made and painting it.  This required that I pull all he relays out.  While there I also did some cleanup by shortening some of the wires from the aftermarket headlight kit.

Next I started working on cleaning up the main wiring loom to the fuses.  As I mentioned before, I need to move the original fuse boxes from in the middle of the dash, behind the gauges, to the right had side of the dash behind what will be the new glove box will be.  I also wanted to upgrade to the new type of fuses while I was at it.  This is a pretty easy job because the wires going to the original fuse boxes were held in with standard female spade connectors.  All I had to do was mark each wire, pull the fuse boxes out, make new wires with the male spade connector and run the wire to the new location.  I did that last spring and was holding everything together with nylon zip ties until I got all the wiring sorted.  Well, now that the wiring is pretty much done, I wanted to start cleaning up.  So I pulled the wires from each side of the of the fuse boxes and laced them up nice and neat.  This took a lot of time because I wasn't careful about how I ran the wires to begin with (lesson learned!) so I had to pull wires rearrange them and then lace them up.  Once I was done, I had four nice tight bundles of wire instead of one big honking one!

After doing all the lacing, I realized that the wires, were all too long!  Unfortunately, I didn't have any more spade connectors, so I pretty much left them until Sunday when I was able to get more at the store.

The rest of Saturday evening was spent cleaning up the wire harness that runs along the right side rocker panel. I added a few wires including +12 volt hot to the trunk, and all of these needed to be taped together and run through a couple of sections of the body (that's when I discovered the shorted wire!)

Sunday I went to the local hardware store and got a bunch'o connectors and started pretty much finished up the wiring to the fuse boxes.  I had some concerns after working on all the wiring that I may have some miss-connected, so I took a lot of time with an ohm meter and the wire diagram to make sure I had things right.  I found out that I actually did have a couple wrong, and one main source was missing to the headlights.  I got that all cleaned up now.  I have to get a few multi-connector adapters at the local auto parts store and then I'm pretty much done.  I'm very happy with the wiring and how it turned out.  Much cleaner then I was hoping for.

So, just to add some balance to my life, I didn't work on the car all weekend!  I did mow the lawn for the first time this year!  I always try to wait for Easter weekend to mow for the first time.  I will be mowing it every week from now until August when it drys out and pretty much stops growing, so I like to delay it as long as possible!  If you can't tell, I don't like mowing the lawn!

So, still moving and making small steps.  I'm waiting for some connectors to come in the mail and I have some more circuit board work to do before I can finish the power/start switches.  I will work on that this week until I head to Forks to go fly fishing on the Hoh River!
Posted by Ed at 8:53 AM