Well, it's been a while since I've posted, but I've been working, all so slowly on the car. I've spent a lot of time working on the air box and air controls. It took me almost three weekends, a lot of metal cutting and fabrication, and several failed attempts, to get a working system. The GM air control that I'm using has six settings: Off, Floor, Floor/Vent, Vent, Floor/Defrost, and Defrost. I've been able to create a system using vacuum motors that will give me everything but Floor/Vent and Floor/Defrost. Because of the system already on the car, I was just not able to come up with a working, reliable system to split the air between the floor and vent / defrost. So I decide to just make those dead settings. Not what I wanted, but it will work.

I also engineered a way-too-complicated system of levers to try to drive both sides of the floor vents with just one vacuum motor. After consideration and talking to some friends, I decided to get rid of the complication and just go with two vacuum motors.

Finally, my original idea of the flapper doors in the center console air vents just didn't work because I could not figure out a way to activate them without bending flexible push rods into figure eights! So I redesigned the flapper doors so that the levers are in a place were I could easily run the push rods to the defrost vacuum motor. This works much better, but required removing the vents from the air box (which I had already installed), and fabricating new doors. Well, better to do it now while it is out of the car, then a year later when things stopped working.

BTW - The flexible push rods are Radio Control push rods that I picked up at my local hobby shop. Yet another example of how all those years working on R/C aircraft paid off!

So, here are pictures of the completed air box and the air box in the car! This was a major deal. Now that I have the air box back in, I can really move forward with other work, like moving the fuse blocks, setting the center console and getting the dash fascias done. 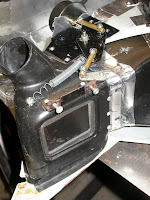 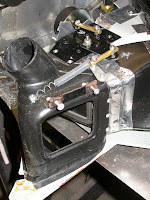 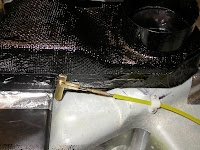 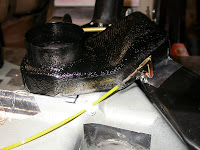 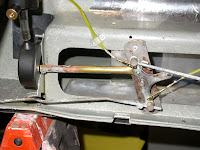 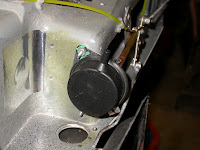 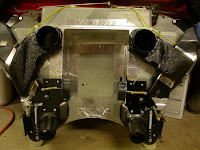 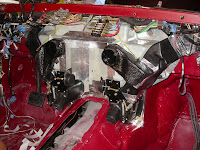 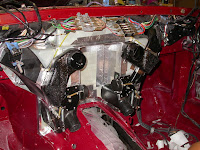 Over the last few weekends I started working on the front door panels (door cards for those British folks monitoring the blog). My original plan was to just use press board, open cell foam and vinyl to make the panels, but I could not leave well enough alone, so I have created a pink foam buck for the door panels, arm rests and door pockets. I also extended the door mounted speakers out and up to better direct the sound. It was a lot of cutting and sanding (about 5 days worth since I took two days off work to do this), but I now have both driver and passenger side doors done and ready to fiberglass. One nice thing is that I am going to keep the pink foam on the door panel, instead of melting it out. This will give really good sound insulation so that I don't need to use expensive and heavy sound proofing material, and I don't need to lay up as much fiberglass because the foam will act as a reinforcement. I am going to need to buy my fiberglass and resin though! Doing much more then I expected! 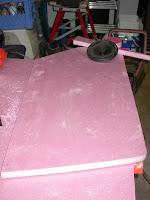 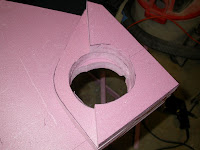 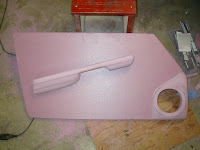 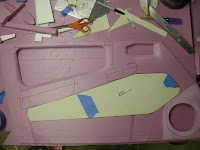 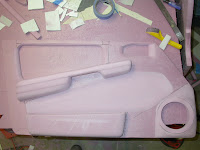 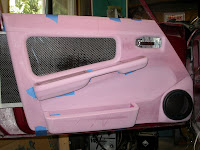 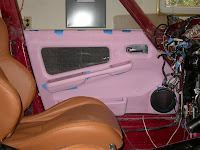