Dateline - Dec 28 - It's been a busy weekend. I had four days off from work, so I decided to take advantage and put some serious time into the car. Friday I started actualizing the interior, but I wanted to make sure everything would work, so I reinstalled the steering column and slipped on the wheel to make sure everything worked ergonomically. Boy does it ever! It felt really good to sit in the car as if it were running. Everything was placed perfectly!

With that out of the way, I started on the center console. This is the center focus of the car, and I wanted to start laying it out so that I can get the overall look. I'm using the original console as the base so I had to get it in shape. I had pulled all the old vinyl and foam backing off, but there was still a lot of residue, so I spent some time rubbing it off. I thought of using acetone to remove the foam, but I didn't know how this would affect the rubberized paper that the console is made out of. So I just rubbed it off instead! Then I had to deal with rust. Yes, even the center console has rust! Anything made of metal in this car has rust of some kind!

I also had to work on the left and right foot well heater outlets which had some serious rust on them, partially because they were covered with vinyl, which held in the water, and partially...well...because they are metal and rust! Once I had everything sanded, I painted it with my rust encapsulating paint. Here are some pictures of the heater outlets before, during and after: 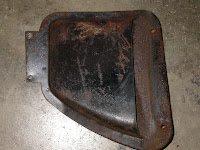 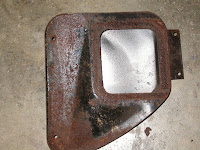 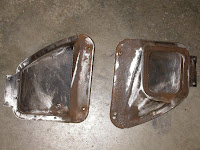 Because I'm extending the console up the dash, I had to create a steal framework and attach it to the console, using pop rivets. Once that was done, I cut out sections of one inch pink insulation foam and epoxied it to the frame, after which I sanded it into shape. I'm not completely happy with how straight-edge everything is right now. I think I will end up adding some more curves to the frame, but at least I know how it will look. 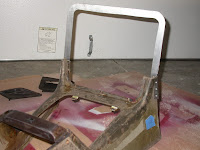 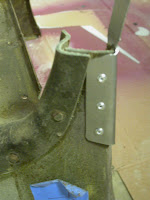 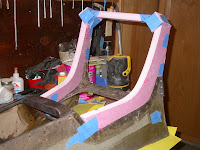 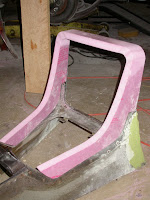 I also did a job that I've been wanting to do for some time. I welded in some blind nuts for the shifter quadrant. It was such a pain trying to reach between the transmission and the tunnel to get washers and nuts on the bolts for the quadrant (see previous post http://leapingv8s.blogspot.com/2009/06/steering-wheel-shifter-and-tunes-plus.html). Since I had everything out, I decided that now was the time to weld in some blind nuts so that I will not need to struggle with that again!

Saturday (Christmas) I took the day off and went and visited my friends Matt and Karen, who sold me the car in the first place (Yes, they are still my friends =). I've asked Matt, who is an accomplished wood worker, to build my wood dash for me. He showed me a piece of "birds-eye" maple that he had in his shop to see if it would do for my dash. It's a grand piece of wood! I hope we can make it work.

Sunday, back to the car! Since I couldn't do too much more on the center console at the moment, I decided to start the buck for the right side dash fascia. The Jags (like most British cars of the time), did not have a fascia below the dash. Instead, they had a black plastic edging that went around the bottom of the dash and a tray below to hold sundries. Since I'm building a custom interior, I've decided to add a fascia that will also incorporate a glove box. To do this, I need to create a fiberglass panel in the correct shape, which I will then reinforce to handle the glove box, and then cover in vinyl like the rest of the interior. To create the fiberglass panel, I first need a "buck" to lay the fiberglass upon.


The buck started out one inch pink foam. I cut each piece out individually and epoxied together. Once the epoxy set up, I took my sanding block and started sanding it down to the correct shape. I'll tell you, all those years of building scale model R/C aircraft really paid off here! It gave me the skills I needed to do this work. Here are some pictures of the process: 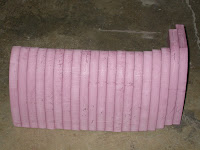 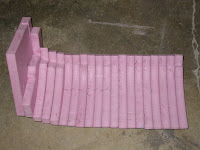 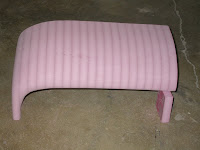 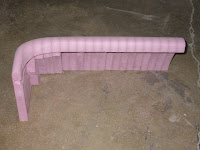 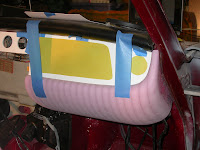 Monday was a day to work on more mock-ups. I needed to figure out how the kick panels that will run from the center console into the foot wells would work, especially with the heater air outlets. So, I broke out the good old construction paper and blue tape and figure out how they will fit. I will probably make these out of light gauge aluminum. I could make them out of fiberglass, but it will be just as easy and less time consuming to make them out of sheet aluminum. They will be covered in vinyl anyway, so that should work well.

I also started mocking up the door panels. The first thing I noticed was that my original renderings were not really to scale! Once I got a chance to see what was really in the car, I realized that I would have to change my plans a bit. But not to worry. I'm going to be able to keep my original idea of carbon composite insets with Jaguar Leapers in silver leaf! And with the narrower seats, I have more room for armrests and door pockets. I'm even going to be able to move the speakers out, making them more directional. Sadly, it looks like I'm going to loose that wood door trim that I wanted, but c'est la vie. Oops! That's French! This is a British car! Let's try the immortal words of John Cleese in "A Fish Called Wanda", "Right! Well! That's it then!" 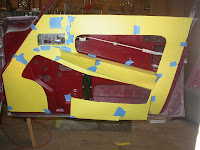 2011 Almost Here And The Clock Is Counting

Dateline - Dec 15, 2010 - Well, the clock is counting down to June to get the car done. I have a lot of work to do and need to focus as much as possible. I've stopped body work for a while, since it is way to cold in my garage to bondo, sand and paint. So I'm working on the interior. In my last post I reported that my gauges have come in. Since then, I've put a good portion of the dash back together by putting the air box back in. I wanted to removed the A/C Coils from the air box first, so I spend several hours drilling out pop rivets and prying things apart with a screwdriver. Of course, I did have a slip and managed to tear some skin off my finger with the screwdriver!

After I got the air box in the car, I started mocking up the dash using the gauges and foam core poster board. I was concerned about having enough space behind the dash for the new gauges, since they are significantly thicker then the stock versions. The good news is that without the a/c coils, I can reduce the size of the air box significantly. This will make it much easier to mount the five center gauges, and the GPS/Radio! I was pretty happy about that.

Also, I'd like to report that I got my new racing seats in! They look really nice in this car! They came with sliders already, but I needed to make brackets because the seat is about five inches narrower then the originals. Of course, just a piece of metal would not do the trick! I had to make brackets the lowered the seats about an inch so that I have enough head room. Here are the brackets: 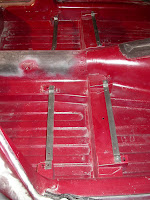 And here are the seats in the car: 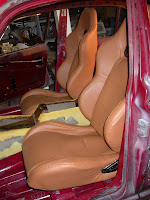 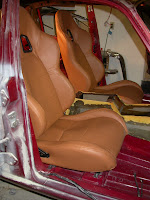 I thought that I could possibly put race seats in the back too, but I tried to fit them and there just is not enough room. So I'm going to need to source a new back seat, or custom make one. I have some ideas there...

After getting the seats in, I started mocking up the center console. I started with the original console with the vinyl removed, then stared added construction paper until I had the idea roughed out. 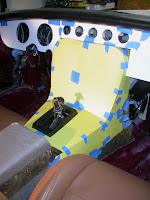 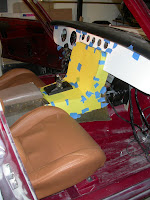 Then I cut the center sections out of mat board and taped construction paper cutouts of the different items like air vents, switches, heater controls and GPS/Stereo. I also added a section of the bottom fairing so that I could get an idea of how it would look: 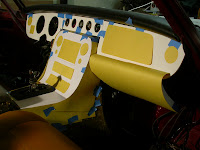 Now I need to wait for some components before I can move forward. I've ordered my climate control box and heater control value, one of the new air vents. I order and received one of the aircraft switches that I plan to use which helped in determining that I can not do my original idea of having four pairs of switches on the dash. I will need to put the switches together in a row, very similiar to the original Series I layout.

I still have to source 1) Carbon fiber for the door panels and the center console, 2) Vinyl of the same color and texture as the seats for the interior, 3) a used heavy duty sewing machine, 4) emergency brake handle and 5) Carpets. But things are starting to go well. Still lots of work, but I really feel like I'm moving forward.
Posted by Ed at 6:35 PM