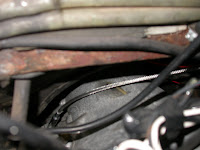 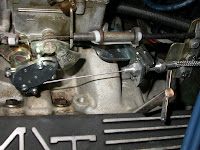 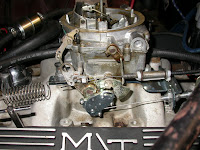 Dateline July 3rd and 4th. I received the new Transmission Value (TV) cable, adaptor and transmission pressure gauge this week and decided to put it in this weekend. The TV cable required removing the carb and putting a plate under it, adding an adaptor to the carb linkage, removing the old cable and installing a new one. The carb, plate and adaptor were all easy. The cable, not so much!

First I had to get the old cable out. Only one nut was holding it in, but it took two long extension and a universal joint on my 3/8" ratchet handle to reach it. I got it loose and pulled the old cable out and realized that there was no way I was going to reach from the top to put the new one on. So I jacked up the car and crawled underneath. No luck there either, since the exhaust pipe was in the way. I had to release the pipe at the manifold and move it out of the way just to get my hand in.

Once I got my hand into the spot, I figured out that there was going to be no way that I could attach the cable to the little wire with a hook on it, put the cable housing back on and tighten the bolt, knowing that everything is still connected. So I had to drop the transmission oil pan! The pan has a drain plug, so I was able to get the oil out easily, and 16 bolts later, the pan was down. Now I could see the TV plunger and the wire the cable needed to hook to. I jammed the plunger so that the wire was fully extended and it was just a matter of treading the wire into the cable end.

After putting everything back together, putting oil in the tranny, hooking up the cable to the adaptor and plugging in the pressure gauge, I did the recommended pressure tests and adjusted the linkage. Everything works great. The linkage is pretty cool because you can adjust the shifting feel of the transmission to really tight, hard shifting and high RPM, to smooth, cruiser type shifting, all with a small Allen wrench!

That was Friday. Saturday I decided to check to see why the car pulls to the right when braking. I thought that perhaps there was something on the left hand brake pad or the calipers were not working right. I jacked up the left side, pulled the wheel and brake pads. Nothing looked amiss, so I cleaned the rotor and pads with Emmery cloth and brake cleaner and put everything back together.

Since I had the car up, I decided to check the speedo cable at the transmission since I new that the cables from there up were OK. Sure enough, the small cable segment that goes from the transmission gear into the 90 degree cable adaptor was twisted in half! So, I took a long screw and filed it into a square shaft and inserted into both ends. Low and behold, I have a speedo! I don't know how long this will hold, but it works right now!

I took the car out to test the brakes and it was still pulling. Disappointing, but I have some ideas about how to troubleshoot this weekend.

Pictures this week are of the carb adaptor and TV Cable setup.
Posted by Ed at 9:06 PM