Dateline - May 31st – Well, it’s been a year since I brought the Jag home and what a year it has been! A lot has happened in my life in many ways, as well as with the Jag. I got the car running and fixed the bad alternator/battery, spent some time driving it, worked on the carburetor extensively, rebuilt the brake master cylinder and replaced the right hand tie rod end, added a fun gas peddle, opened the doors up to fix stuck power windows and door handles, and assessed some rust issues with Duct Tape. Then I put the car up on jack stands and really went to work!

Now the car is moving in the other direction. Parts are starting to move off the shelf and back on the car! That’s really cool!!!!

This weekend I hung the trunk (boot) lid and assessed how much more work the back of the body needed. There was a lot of filler back there before, but I think all the body work I’ve done has really reduced what I will need to do. I’m not faulting who accomplished the prior work because they did a really good job and I’m sure it was done in a body shop where time is money. Since I don’t have the time constraint, I was able to do more to get the body straight. 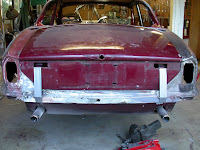 I also hung the passenger side doors and right front wing. The doors needed just a little tweaking, but in general, this car is really straight. The center seam lines right up and the door seams are very square, considering this is an almost 40 year old car that has had a few shunts, this isn’t bad at all! 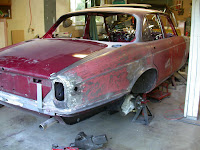 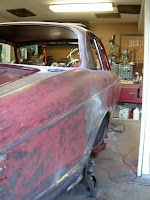 The right front wing, on the other hand, was pretty nasty! A screw-in dent puller was used to pull out a bad dent around the radio antenna hole which left holes in the body, plus the dent was never really corrected. There was easily a 1/4 inch of filler on this part of the body! The front of the fender around the side marker had also been severely dented and needed to be hammered out. And finally, the modifications done on the headlight area to hold the round chrome surrounds and larger size headlight needed to be ground away.

I spent a good three to four hours hammering, sanding, hammering again, fitting, un-fitting, hammering, sanding, etc. I welded the antenna hole closed with a small piece of sheet metal (I’m using an internal hidden antenna), and all the dent puller holes. I also welded closed the holes on the bottom of the wing in which the Jaguar emblem used to fit. I’m not sure if I want the emblem on the car with the leaper that I’m putting into the paint, so I figured it’s better to fill the holes now and re-drill them later if I want them. I also had to weld a couple of areas around the bottom of the fender to strengthen the metal where it had cracked. 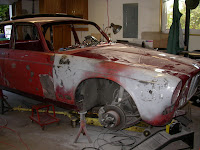 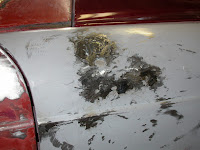 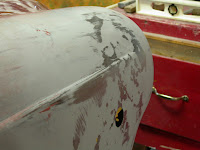 Finally, I decided to fill in the gap that is between by the non-standard headlight surround and the fender by welding in new sheet metal. I could have used the bondo method used before, but since I own a shrinker/stretcher and a welder, I just could not go with that option! Here are pictures of the gap before and after: 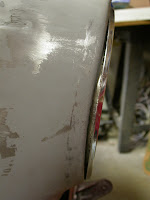 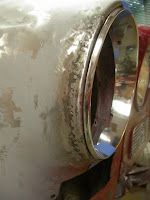 I’m feeling good now! I probably have another month of body work to do before paint, but that’s OK. Just about the time I get tired of working on one thing, I finish it and something else needs to be done. I can live with that!
Posted by Ed at 9:41 PM