Sitting But Not Forgotten - One Year on Jackstands

Well, the Jag has been sitting since July. The summer saw a lot of other interests of mine come into play, including road bicycling (got a really cool Felt road bike this year ), and other things. Now that the winter is starting to set in, and the car has officially sat on Jack stands in the garage for a year, it is time to start going again.

Over the last couple of weeks, I've done some new virtual renderings of the interior of the car using my 3D rendering software "Blender" (http://www.blender.org). I've added a GPS system, removed a lot of the extra gauges and changed the ones that I kept to white faces, and found these really cool aircraft switches that I'll be able to use for the interior to make it look uniform. I've also added two new air vents in the dash to help increase circulation in the car. This has been a real problem in the Series 1 cars. Here is the results thus far 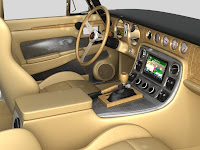 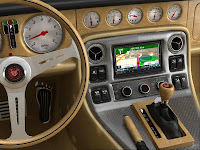 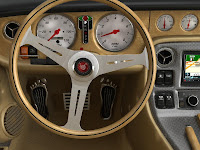 Also, this weekend I started working on the car again. I've hung both the front and back left side doors, and added the metal around the headlight on the left fender for the headlight surround. I'm still stripping paint, but I should have that done soon and can hang the front fender. The drivers side of the car is in a lot better shape then the passenger, and I think I will be able to get a lot more done quickly.

The plan now is to get everything done on the inside and outside of the car accept the paint. I will get all the interior built, rewire done, etc. and then pull it out, truck the car to the painter in the spring, have them do their magic and then bring the car back, install the interior and drive it! I've decide to not try to spray the car in the garage. Just too much hassle and I have a much better chance of getting a good job done by having a pro do it.
Posted by Ed at 7:27 PM