Dateline – Feb 21-22 – Accomplished more work this weekend. I removed both back doors and have them stripping. I found that heat makes a big difference with the stripper. I’ve been leaving the stripper on the car for three or four days and it sometimes barely breaks the surface. I left one door in the sun on Saturday and in three hours all the first layer of paint was sloughing off! If I’m in a hurry, heat is a real good thing! 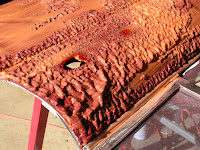 I also removed the bottoms of the back seats and guess what I found – more rust! Hard to believe I know. It was also painfully obvious that the replacement seats in the car were not only not the right size, but not even Jaguar seats. I think these came out of something like a Land Rover. They did not fit at all and I even found wood blocks under the seats to hold them up! So, I am now in search of the correct back seats. I was kind of thinking that putting two race seats back there would be fun too, but that would be expensive! I think I’ll just stick with finding a good condition used back seat. I sourced one in the fall, but I don’t know if that is still available. 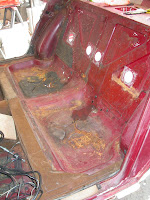 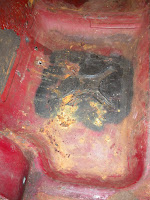 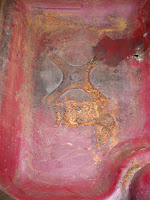 Finally, I removed all the carpeting and sound proofing in the back, so I have a really good idea of what I need to clean, scrap, weld or replace. Fortunately, all the rust except in a couple of non critical places looks like surface issues, which is really good because if the rust was extensive around the “C” or “B” pillars, I might as well write off the car. As it stands, I haven’t run into anything that can not be repaired. 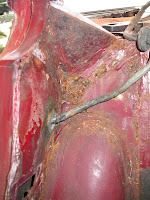 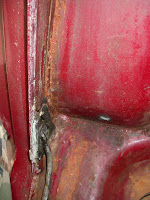 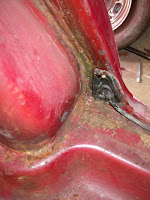 It's also good to know that, even by 1971, the Brits had still figured out how to include wood in the construction of cars! These pieces of ash are under the aluminum rocker covers to keep them from crushing if stepped on. 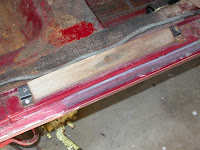 After I get the back door stripped, I’m going to remove the glass and chrome and put them aside. Then I start on the front doors, front seats and interior. Definitely moving forward!
Posted by Ed at 7:09 PM

Dateline - Feb 13 – 14 – Wow! I just realized it's been since October that I last posted! A lot has happened since then in my life, so the Jag has spend some time in the garage, collecting dust (and stuff!). Over the last several months, I've taken a few hours here and there to work on the back quarter of the car. I decided that I needed to remove the paint on all the side panels so I could see the extent of the rust. I tried sanding, but managed to spend hours just cutting through the top layer of epoxy based aircraft paint on the car! Tough stuff. Then someone mentioned stripping the paint. I've used paint strippers before and just did not want to deal with the mess, smell and toxic clean-up. I thought about the idea for several weeks, then broke down and went to my local Home Depot. And guess what I found. Citrus based paint strippers, safe for in house use! WOW! So I bought a small bottle for $11 and tried it out on the left rear fender, which is the one I tried sanding down. I put a thin coat on and got some good effect, but it wasn't really cutting through the paint. So I then really globbed it on! OMG! Paint sloughing off left and right! It even softens and weakens polyester Bondo products! Three to five days of sitting on the paint and a good sharp paint scrapper had the paint removed! I now have the whole back end clean of almost all the paint. I still have some sanding to do before I do the body filler, but wow, so little work! And my garage is not full of red paint dust! And only $33 dollars for the stripper! Precious! 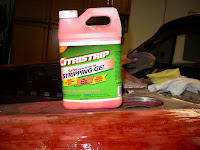 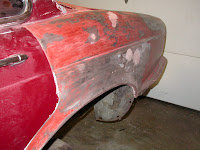 Now that I have the paint off, I can see all the body filler! This car is not a virgin to the auto shop, let me tell you! There is a serious dent on the top of the left fender right by the gas filler. I think someone dropped a gas nozzle with significant force against the car! Also, someone bumped this car in the back, and it was not a love tap! Serious wrinkled metal and lots of filler! I think this was done early in the cars history, and the repairs are definitely professional. This car does not have a 5 MPH bumper like modern cars. The bumper is attached directly to the body, so any kind of rear end incident is going to make damage. 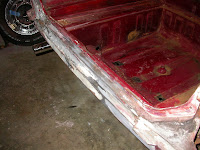 I also think the right rear fender was replaced, either because of this accident or another. I think that repair job is what caused all the rust issues because there is a lot of poor welding, metal that was not properly straightened, and lots, LOTS of Bondo!

So, this weekend I pulled out my body tools that I've not used in 20 years (since the Spitfire) and started at it! It took some drilling to get access to the fenders, and several hours swinging hammers, but I managed to get a lot of the rear metal straightened out. I'm still going to need to fill, but it will be a lot less. I can't tell exactly what I have until I fit the boot lid, but I'm thinking it is pretty good. 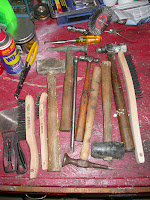 I also took the time to wire brush the entire boot area. Found some more rust and hole in the trunk floor and several on the sides, either hidden under Bondo, or covered by rust. However, this all looks repairable at this point. I've got a lot of welding to do eventually, but I'm looking forward to that! 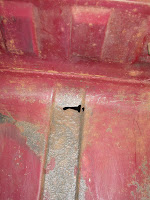 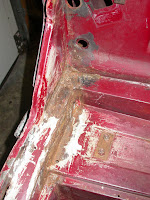 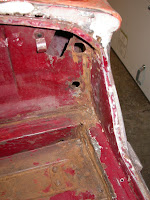 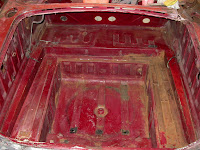 Finally, I pulled the right passenger door off and put it on saw horses and started the stripping process. I'm going to pull each door in turn and clean it up. This will open the interior up so that I can clean it up too. 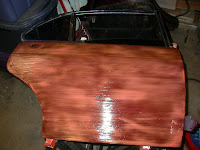 So, six hours of work, but I got a heck of a lot done. Starting to get excited about the car again. I just need to take my time and avoid perfection!
Posted by Ed at 8:17 PM