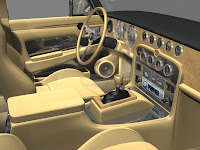 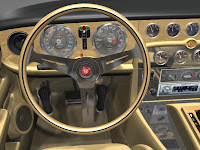 Dateline - Aug 20th - Since I got the car, I've been toying around with how I want the interior of the car to look. I decided early on to not make it a restoration, so what I do with the interior is up to me. So, using my 3D software (Blender) and paint programs (the Gimp), I started modeling the interior for visualization. This is what I have come up with. I've reused the speedo/tack and the classic Jaguar switches, as well as some badges, center console, etc., but am going to do a lot of modifications, including a more then complete gauge set, birdseye maple dash, door and shifter console accents, carbon fiber for the center console and door inlays, new vinyl and carpets, new bezels under the dash and race seats. I think this is going to be really cool when I get done.
Posted by Ed at 10:19 PM

Dateline Aug 15th – It has been a very busy weekend and have not had much chance to work on the car, but I did get about an hour to swap out the tie rod end. The parts I ordered from Terry’s Jaguar showed up on my doorstep on Friday (good fast service, thanks again!), so I lifted the right side of the car and in about a half hour, had the old end out and the new one in. I was interested in how the car would handle, so I took it out for a drive. It is still pulling a bit to the right (probably could use a professional alignment and a brake rebuild) but it does dive a heck of a lot better! It also tracks much better on the grooved roads out here. So I’m pleased with the fix. My only issue now, do I get the alignment now, or wait until I pull the front end apart this winter to when I replace the rubber suspension bushing with urethane and lower the car!

As I side note, I helped a friend move this weekend and he had an interesting piece of luggage that is going to be in the boot of my car. It’s a small wet bar! It’s missing glasses as such, but I can get those. What a gorgeous period piece! He donated to the Jaguar! What a friend!
Posted by Ed at 10:18 PM

Dateline, Aug 8th – I’ve noticed that the car really pulls right when braking. I’ve talked about this with friends and I’ve tried cleaning the left side brakes and checking for oil, contamination, etc., but nothing seemed to help. A friend suggested swapping out the brake pads to see if that makes a difference. So when I jacked up the car this weekend and looked under the right side of the car, I noticed that the wheel had a lot of play. Examination showed that the tie rod was worn! The interesting thing was that the left hand one had been replaced already, but not the right! Go figure!

Anyway, to test out my assumption that the tie rod was making the difference, I adjusted the right wheel to be significantly toe in and drove it around. Sure enough, brake still pulled right, but not as much. Time to order a new tie rod end.

Now the interesting part. This is the first time that I tried to get parts for my car locally. It’s Saturday morning, and I’m thinking that I’m going to find a place, no problem. I started calling around. NOTHING! None of the British car parts stores are open! Finally, I called a European car place just down the street and asked if they carry parts. No they said, but you can call this place that they do all their business with. I said, “Thanks! I call them right now.” The guy at the other end said, “Their not open on the weekends. We have been in this business long enough to were we don’t have to be.” WOW! It must be nice to be in a business that does not have to service customers on the weekend!

However, as I started to think about this, I realized why. First, all modern Jaguars are very reliable, much more so then the cars of old. Plus, up until the 90’s, Jaguars were always a poor-rich man’s car. Not as expensive as a Porsche or Mercedes, but not in the reach of the guy who buys the Chevet. Because of this, and because they are British, a lot of maintenance had to happen, and a lot of that done in the owners garage. Thus, parts are available. Now that the cars run in the $80,000 range, I suspect that there are not a lot of Jaguar owners turning wrenches and loosing skin on their knuckles as in the days of old! So it makes sense that the parts stores are only going to be open during the weekday. That is when the repair shops are open!

So, the answer is mail order. Thank you Terry’s Jaguar for having the parts I need!
Posted by Ed at 10:18 PM

Dateline Aug 5 – An interesting thing I noticed as I have been driving the car is how much engine smell it get in the cabin. I then realized that this car had no battery box (the old one had rusted away years ago, and so the only things cover the holes in the firewall that are used gas/brake/clutch peddles for right-hand-drive cars was the battery itself! So, Also, my battery has been hold in place with a bungy cord, which is OK for troubleshooting in the garage, but not the best for quick stops at freeway speeds! So I bought a new plastic battery holder. I made sure to put a good layer of duct tape down over the holes and installed it. This is a short term fix (DUH! Duct Tape! Really?) until I get to details the engine bay. It sure did make a difference smell wise and I feel a lot better about my batter not flying forward into the radiator, shorting out and starting the car on fire!
Posted by Ed at 10:16 PM